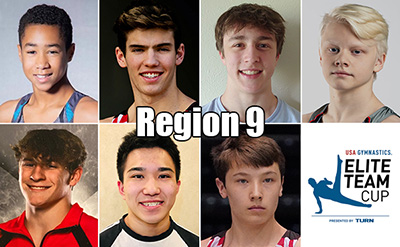 INDIANAPOLIS, Ind., February 18, 2022 – The Region 9 roster is set for next week’s Elite Team Cup Presented by TURN, which is being held February 26 at Ford Center at The Star in Frisco, Texas, in conjunction with the 2022 Winter Cup Presented by OZONE and TURN and annual Nastia Liukin Cup. An all-rookie lineup for Region 9 will look to make a memorable entrance onto the Elite Team Cup stage.

The provisional Region 9 roster is listed alphabetically below. Seven team members will travel to Frisco, but only six will compete.

Tickets for the Elite Team Cup and accompanying Winter Cup and Nastia Liukin Cup are currently on sale.

USA Gymnastics men’s artistic regions are determined by state and are listed below.