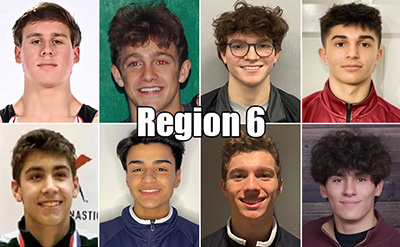 INDIANAPOLIS, Ind., February 19, 2022 – After sitting out the 2021 competition, the 2020 runners up are back in the show. Region 6 today announced its lineup for the 2022 Elite Team Cup Presented by TURN. While no holdovers from the 2020 squad will be participating, Region 6 athletes will be looking to make a splash in their return to the annual competition, which pits regional teams of six men’s Junior Elite gymnasts against one another in pursuit of national dominance.

This year’s Elite Team Cup is set for February 26 at Ford Center at The Star in Frisco, Texas, and is being held in conjunction with the three-day Winter Cup Presented by OZONE and TURN as well as the annual Nastia Liukin Cup. Top performers will earn the opportunity to compete for junior apparatus titles on the final day of Winter Cup alongside their senior counterparts, including 2020 Region 6 team members Matt Cormier (Milton, Mass./Penn State University), Ian Lasic-Ellis (Dover, Mass./Stanford University) and Fred Richard (Stoughton, Mass./Massachusetts Elite Gymnastics Academy).

The preliminary Region 6 roster is listed alphabetically below. Eight athletes will travel to Frisco, though only six will compete February 26.

Tickets for the Elite Team Cup and accompanying Winter Cup and Nastia Liukin Cup are on sale now.

USA Gymnastics men’s artistic regions are determined by state and are listed below. The remaining regional rosters will be released in the coming days. The full list of participating athletes is available here.