The 2022 Winter Cup Presented by OZONE and TURN kicks off Friday, February 25 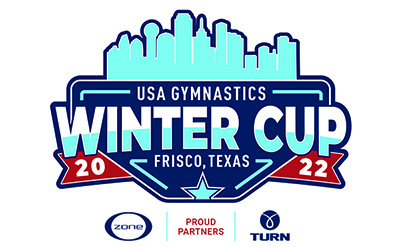 FRISCO, Texas, February 18, 2022 – The first national elite gymnastics meet of 2022 will get underway Friday, February 25, at Ford Center at The Star in Frisco, Texas, as the Winter Cup Presented by OZONE and TURN kicks off a domestic competition slate set to culminate with the U.S. Gymnastics Championships August 18-21 in Tampa, Fla. The Winter Cup will once again feature both men’s and women’s divisions across three days of competition and will be accompanied by the annual Elite Team Cup Presented by TURN and Nastia Liukin Cup, which feature some of the top emerging talent in the country.

The U.S. men will name a new Senior National Team following the competition, and Winter Cup performances will help determine international selection for several upcoming events, including multiple men’s artistic World Cup stops and the 2022 DTB Pokol Mixed Cup and Team Challenge in Stuttgart, Germany. Winter Cup is also a qualifying event for the 2022 U.S. Gymnastics Championships, which serve as the annual national championships for artistic gymnastics in the United States.

Senior men will lead off Winter Cup competition Friday, February 25 at 7:30 p.m. ET with the men’s senior all-around title at stake. Apparatus champions will be crowned Sunday, February 27 at 6:30 p.m. ET based on combined two-day scores. The top Elite Team Cup performers from Saturday’s competition will join their senior counterparts for the men’s Day 2 session on Sunday, as junior individual event titles will also be up for grabs. The top-five senior all-around finishers on Day 1 of competition will earn automatic selection to the U.S. Men’s National Team. The full team will be announced in the days following Winter Cup.

The women’s senior competition, which will determine all-around and event champions, will kick off Saturday, February 26 at 1 p.m. ET. Juniors will compete Sunday at 1 p.m. ET with all-around and apparatus titles on the line. The top-three all-around finishers in each division will automatically qualify to represent the U.S. at the 2022 DTB Pokol Mixed Cup and Team Challenge March 18-20 in Stuttgart, Germany. Winter Cup performances will also help determine the remaining team members for the event.

Podium training for each Winter Cup division, as well as the Nastia Liukin Cup and Elite Team Cup, will be livestreamed free on USA Gymnastics’ YouTube channel. The podium training schedule is available below. All times are eastern.

Multiple Olympic and World Championships team members will be in action at the 2022 Winter Cup. The full list of participating athletes is below. Gymnasts are listed alphabetically by state.