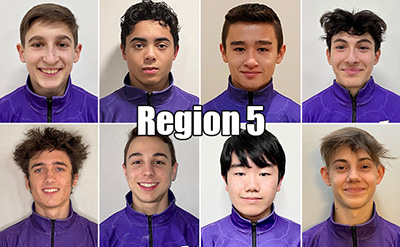 INDIANAPOLIS, Ind., February 15, 2022 – Region 5 will once again be led by 2021 all-around runner-up Kai Uemura, as the team looks to improve on last year’s fourth-place Elite Team Cup finish. Uemura will have some help from fellow 2021 veteran Tai Gopaul, while six members of the squad are slated to make their event debuts.

In all, nine regional teams will compete head-to-head for national bragging rights Saturday, February 26 at Ford Center at the Star in Frisco, Texas. The 2022 Elite Team Cup Presented by TURN is being held in conjunction with this year’s three-day Winter Cup Presented by OZONE and TURN, and the top individual performers will earn the opportunity to compete for junior apparatus titles Sunday, February 27 alongside their senior counterparts.

The provisional Region 5 roster is listed alphabetically below. Eight gymnasts have been named to the team, but only six will compete.

All- and single-session tickets for the Elite Team Cup, Winter Cup and Nastia Liukin Cup are currently on sale.

USA Gymnastics men’s artistic regions are determined by state and are listed below. Rosters for Regions 1, 6, 7 and 9 will be released in the coming weeks.