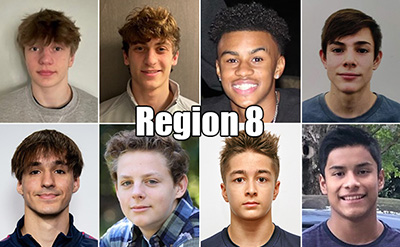 INDIANAPOLIS, February 4, 2022 – Region 8 will return five of six gymnasts from last year’s Elite Team Cup squad, as they look to improve on their third-place finish February 26 at Ford Center at the Star in Frisco, Texas. Region 8’s familiar faces will include Maxim Bereznev, who took fourth in the all-around competition in 2021, Jaden Blank, Alexandru Nitache, Garrett Schooley and Danilo Viciana.

In total, eight athletes will travel to the event though only six will compete. The full Region 8 provisional roster is listed alphabetically below.

The Elite Team Cup features regional teams of six men’s Junior Elite athletes competing for national prominence. The event is held in conjunction with the annual Winter Cup and Nastia Liukin Cup, with top performers earning the opportunity to compete for junior apparatus titles on the final day of Winter Cup alongside their senior elite counterparts.

More information on the Elite Team Cup and Winter Cup competitions is available at WinterCup.com. Tickets for both events are on sale now.

USA Gymnastics men’s artistic regions are determined by state as indicated below. Elite Team Cup rosters for Regions 2, 3, 4, 5, 6, 7 and 9 will be announced in the coming weeks.