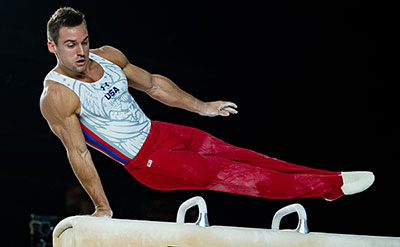 LAS VEGAS, Feb. 15, 2018 – Two-time Olympian Sam Mikulak of Newport Beach, Calif./U.S. Olympic Training Center, leads the all-around standings after the first of two days of competition at the 2018 Winter Cup Challenge. The competition is being held at the Westgate Las Vegas Resort in Las Vegas and the finals are scheduled for Saturday at 7:15 p.m. PT. Fans can watch the competition live on the USA Gymnastics YouTube channel.

2017 World team member Marvin Kimble of Milwaukee/Salto Gymnastics, is currently second after posting an 83.500 in the all-around. 2016 Olympic team alternate Akash Modi of Morganville, N.J./Stanford University, is currently third at 83.350.

In the junior competition, Bennet Huang of Palo Alto, Calif./University of Iowa, posted a 77.600 to lead the all-around standings. Asher Hong, Tomball, Texas/Cypress Academy, was close behind with a 77.400. Kevin Penev of Penfield, N.Y./RGA, and Jeremy Bischoff of Canyon Country, Calif./Wallers GymJam, tied for third in the all-around with matching 76.600 totals.

Junior athletes will advance to the finals according to the all-around ranking from the first day of competition. The senior athletes will advance according to the Men’s Program Committee’s points ranking system. All-around and individual event champions will be determined via a combined two-day score. For information on the points ranking system used for advancement to the final round, as well as the one for determining the national team, click here.

Tickets are $25 for Feb. 18 (finals) and may be purchased on site. The Winter Cup finals format has junior and senior gymnasts competing in the same field.