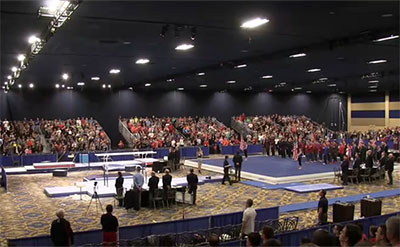 USA Gymnastics will be live-streaming all three competitive sessions via its YouTube channel, with coverage beginning tomorrow at 4 p.m. ET with junior prelims. The senior competition begins at 9:30 p.m. ET Thursday, and the finals are scheduled for 10:15 p.m. ET on Saturday.

The top three all around athletes from the 2017 P&G Gymnastics Championships in both the 15-16 age division and the 17-18 age division are expected to compete at the Winter Cup. Those athletes are: Brody Malone of Summerville, Ga./Cartersville Twisters; Vitaliy Guimaraes of Arvada, Colo./5280 Gymnastics and Max Andryushchenko of Arlington Heights, Ill./Ohio State University from the 17-18 division and Garrett Brauton of Cypress, Texas/Cypress Academy, Paul Juda of Deerfield, Ill./Buffalo Grove Gymnastics and Riley Loos of El Dorado Hills, Calif./Technique Gymnastics from the 15-16 age group.

The first day of competition will consist of one session for the junior division and one for the senior division. The finals session will feature the top 28 senior athletes and the top 14 juniors.

Junior athletes will advance to the finals according to the all-around ranking from the first day of competition. The senior athletes will advance according to the Men’s Program Committee’s points ranking system. All-around and individual event champions will be determined via a combined two-day score. For information on the points ranking system used for advancement to the final round, as well as the one for determining the national team,
click here.

Tickets are $25 for Feb. 16 (both sessions) and Feb. 18 (finals), with an all-event pass for $50 (which also includes access to the Black Jack Invitational). Tickets may be purchased on site on the afternoon of Feb. 14 and on both competition days. The Winter Cup format has junior and senior gymnasts competing in the same field.