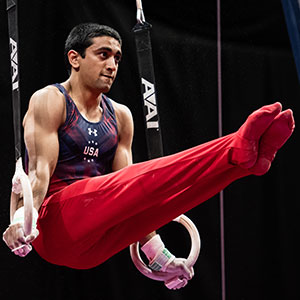 LAS VEGAS, Feb. 16, 2017 – Akash Modi of Morganville, N.J./Stanford University posted the top score in the all-around after the second of two preliminary sessions on the opening day of competition at the Winter Cup Challenge at Westgate Las Vegas Resort. Competition concludes Saturday at 10 p.m. ET with the finals, which will be webcast live at WinterCup.com/live.

Two-time Olympian and four-time U.S. champion Sam Mikulak of Newport Beach, Calif./U.S. Olympic Training Center, suffered an injury in his first rotation on the floor exercise and could not continue to compete. The initial diagnosis is an Achilles tendon injury.

The top 42 gymnasts, according to the all-around placements and Men’s Program Committee’s points ranking system, will advance to the final competition, along with the top three gymnasts on each apparatus. The all-around and individual event champions will be determined via a combined two-day score. For information on the points ranking system used for advancement to the final round, as well as the one for determining the national team, click here.

The Winter Cup competition schedule is: preliminary rounds, Feb. 16 – 1 p.m., and 6:30 p.m.; and final round, Feb. 18 at 7:15 p.m. Tickets are $25 for Feb. 16 (both sessions) and Feb. 18 (finals), with an all-event pass for $50 (which also includes access to the Black Jack Invitational). Tickets may be purchased on site on the afternoon of Feb. 15 and on both competition days. The Winter Cup format has junior and senior gymnasts competing in the same field.