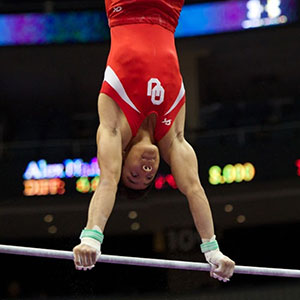 LAS VEGAS, Feb. 18, 2016 – Kanji Oyama of Huntington Beach, Calif./University of Oklahoma, posted the top score in the first of two preliminary sessions on the opening day of competition at the Winter Cup Challenge at Las Vegas’ Cashman Center. Competition later today at 9:30 p.m. ET with the second preliminary round of competition, which will be webcast live at WinterCup.com/live.