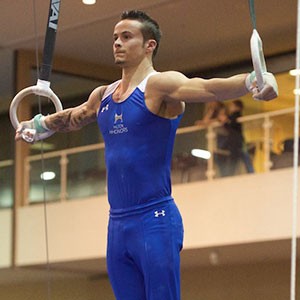 LAS VEGAS, Feb. 21, 2015 – Paul Ruggeri of Manlius, N.Y./Team Hilton HHonors (U.S. Olympic Training Center), won the all-around competition at the Winter Cup Challenge at Las Vegas’ Riviera Hotel & Casino’s Royale Pavilion. He posted a combined total of 175.250, ahead of Steven Legendre of Norman, Okla./Team Hilton HHonors (University of Oklahoma), 174.700, and Donnell Whittenburg of Baltimore, Md./Team Hilton HHonors (U.S. Olympic Training Center), 174.500.
Ruggeri began on the high bar, where he performed a layout Kohlman and a nearly stuck layout double-double dismount for a 15.050. In rotation two, he tumbled an Arabian double layout and a tucked full-in for a 15.350. He earned scores of 13.400, pommel horse, and 13.650, still rings, in rotations three and four, respectively. Ruggeri vaulted a Yurchenko half-on, front double full off for a 15.350. Entering the final rotation with just a .050 lead over Legendre, Ruggeri delivered a 14.750 on the parallel bars to win the title.

Legendre earned the floor exercise title with a combined score of 31.100. Ellis Mannon of Indianapolis/University of Minneapolis, won the pommel horse gold with a 30.700. Marvin Kimble of Milwaukee/Swiss Turners, took the top spot on the still rings with a 30.300. Ruggeri posted the high scores on vault (30.700) and high bar (30.550). Whittenburg won the parallel bars title, posting 30.250.
Performances at the 2015 Winter Cup Challenge will help determine the 15 men who will comprise the U.S. Men’s Senior National Team through the 2015 P&G Gymnastics Championships in Indianapolis Aug. 13-16. The six members of the 2014 World Championships squad, plus the alternate, retain their spots on the national team. The remaining eight spots will be determined based on the following criteria: the top three ranked all-around athletes who are not already on the senior national team; two based on the National Team Points System; two athletes selected by the Men’s Program Committee; and one selected by the national team coordinator.
The top 42 gymnasts, according to the Men’s Program Committee’s points ranking system, will advance to the final competition, along with the top three gymnasts on each apparatus. The all-around and individual event champions will be determined via a combined two-day score. For information on the points ranking system used for advancement to the final round, as well as the one for determining the national team, click here.