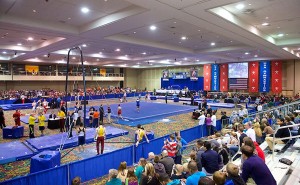 LAS VEGAS, Feb. 18, 2015 – The 2015 Winter Cup Challenge is set for Feb. 19-21 at Las Vegas’ Riviera Hotel & Casino’s Royale Pavilion. Defending champion Chris Brooks of Houston/Team Hilton HHonors (U.S. Olympic Training Center) is scheduled to compete along with five members of the bronze-medal-winning team from the 2014 World Championships. All three sessions of the competition will be streamed live at WinterCupChallenge.com/live, beginning at 4 p.m. ET on Thursday, Feb. 19, with the first of two preliminary sessions.


The Winter Cup competition schedule is: preliminary rounds, Feb. 19 – 4 p.m., and 9:30 p.m.; and final round, Feb. 21 at 10:15 p.m. All times Eastern. Tickets are $25 for Feb. 19 (both sessions) and Feb. 21 (finals), with an all-event pass for $50 (which also includes access to the Black Jack Invitational). Tickets may be purchased on site on the afternoon of Feb. 18 and on both competition days. The Winter Cup format has junior and senior gymnasts competing in the same field.


Performances at the 2015 Winter Cup Challenge will help determine the 15 men who will comprise the U.S. Men’s Senior National Team through the 2015 P&G Gymnastics Championships in Indianapolis Aug. 13-16. The six members of the 2014 World Championships squad, plus the alternate, retain their spots on the national team. The remaining eight spots will be determined based on the following criteria: the top three ranked all-around athletes who are not already on the senior national team; two based on the National Team Points System; two athletes selected by the Men’s Program Committee; and one selected by the national team coordinator.


The top 42 gymnasts, according to the Men’s Program Committee’s points ranking system, will advance to the final competition, along with the top three gymnasts on each apparatus. The all-around and individual event champions will be determined via a combined two-day score. For information on the points ranking system used for advancement to the final round, as well as the one for determining the national team, click here.