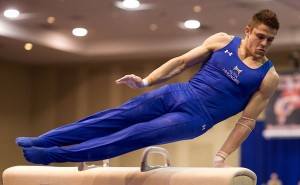 
Brooks, the 2010 Winter Cup champion, started the night with a solid effort on the pommel horse and scored a 13.900. In rotation two, he dismounted the still rings with a one-and-a-half twisting double back for a 15.050. He performed a sky-high front handspring double front on vault in the third rotation and scored 14.800. Brooks earned his highest score of the day, a 15.550, on the parallel bars and followed that with a 15.350 on the high bar. In the final rotation, he executed an Arabian double pike and front layout to double front for a 14.400 and the title.

For information on the points ranking system used for determining the national team, go to www.usagym.org.