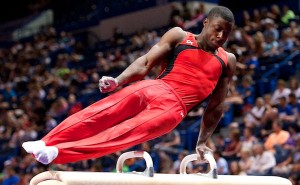 LAS VEGAS, Feb. 20, 2014 – Marvin Kimble of Milwaukee, Wis./Swiss Turners, posted an 86.200 in the all-around at the 2014 Winter Cup Challenge today inside the Riviera Hotel & Casino’s Royale Pavilion in Las Vegas to lead the field after the first of two days of competition. Kimble was followed closely by 2013 World parallel bars bronze medalist John Orozco of The Bronx, N.Y./Team Hilton HHonors (U.S. Olympic Training Center), and Sean Melton of Orlando/Ohio State University, who are tied for second with 82.150.


The final day of competition begins at 10 p.m. ET on Saturday, Feb. 22, and fans can watch it live at WinterCup.com/live.


Orozco was solid on the still rings, posting a 14.500 after finishing his routine with a one-and-a-half twisting double flyaway. He performed a front handspring double full on vault to earn a 15.150, the second highest score on the event in the evening session. He posted the top score of the day on the high bar with a 15.550. His other event totals were 13.750, floor; 12.700, pommel horse; and 14.500, parallel bars.


The top 42 gymnasts, according to the Men’s Program Committee’s points ranking system, will advance to Saturday’s final competition, along with the top three gymnasts on each apparatus. The all-around and individual event champions will be determined via a combined two-day score. For information on the points ranking system used for advancement to the final round, as well as the one for determining the national team, go to www.usagym.org.