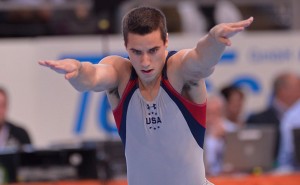 
2013 World floor exercise silver-medalist Jake Dalton will make his 2014 competitive debut this weekend at the Winter Cup Challenge in Las Vegas. The competition, held at the Riviera Hotel & Casino’s Royale Pavilion, begins tomorrow with seven national team berths on the line. The six members of the 2013 World Championships squad including Dalton, plus the two alternates, will retain their spots on the 15-man national team.


Competition begins with two preliminary sessions (4 p.m. and 9:30 p.m. ET). The finals will begin at 10 p.m. ET on Saturday, Feb. 22. USA Gymnastics will provide video coverage of the event, including every competitive routine and post-competition interviews, on its YouTube channel. For more information on the Winter Cup Challenge, go to wintercup.com.


A member of Team Hilton HHonors and a Reno, Nev., native, Dalton comes to Vegas as the defending champion but is coming off an injury that limited his participation at Worlds.


“I’m not trying to rush into things too quickly, especially having that national team spot because of [being on the] World team,” Dalton said. “I’m probably only doing rings when I get out there.”


Dalton’s injury, a jammed thumb before Worlds, required surgery after returning from Antwerp, Belgium, and the World Championships.


“Right now, I’m getting back into things,” Dalton said of his return. “Everything feels pretty good. I’m just trying to get back to full gear.”


Full gear means showing the world that Team USA’s four medal performance at Worlds – it was their best ever at an individual Worlds and the best since the U.S. men took eight medals at the 1979 World Championships – was no fluke.


“It was pretty incredible,” said Dalton of the team’s performance. “I think it’s just the beginning of what we wanted to do. We went and did what we were capable of doing.”


This year, the World Championships will be held in Nanning, China, prompting the U.S. men to hold a national team training camp in Beijing last month with members of the Chinese national team.


“Watching the Chinese train and seeing some of the turns they were taking was pretty impressive,” said Dalton, who trains at the University of Oklahoma with head coach Mark Williams. “If they were just working a skill, they would go up and do the skill 5-6 times in one turn and do that turn 2-3 times.


“I think there were definitely things they took away, and a lot things we took away [from the camp],” he added. “We were trying to keep our eyes open, see what they do and get a feel for how they train.”


The team also had a chance to sightsee, visiting the Great Wall (Dalton’s favorite) and other attractions. Dalton stressed that the camp was an important opportunity for members of the national team to simply “get a feel for China.”


“We’ve been a young group of guys for a while,” he said. “The experience is kind of adding up, and we’re getting used to the pressure and understanding what works for us.”


The U.S. Team at the 2012 Olympic Games in London was one of the youngest in recent memory. Now, with that experience under their belts, Dalton thinks they might have a leg up on the competition to make the team in 2016.


“I think it’s going to be hard for anyone to be on that team,” Dalton said. “But if you weren’t on that team… it may be hard because you don’t have that experience going through everything.”


And even though the 2016 Olympic Games in Rio de Janeiro, Brazil, are still more than two years away, Dalton has a singular focus that keeps him motivated: bringing home a medal for Team USA.


“The biggest thing [to staying motivated] is just remembering what it felt like finishing the Olympic Games and not being satisfied coming home empty handed”, said Dalton. “I think that’s enough motivation for the next couple of years.”