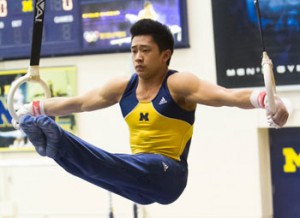 Competition concludes with the Winter Cup Challenge finals on Saturday at 7 p.m. Pacific time, where the top 42 athletes according to the men’s program points system will compete.

De los Angeles started the night scoring 14.500 on pommel horse, 14.250 on still rings and 13.900 on vault. On the parallel bars, de los Angeles performed a tucked Belle before dismounting with a double pike to score 13.850. In the fifth rotation, he scored 13.850 on the horizontal bar, executing laidout and straddled Tkatchevs. Finishing the competition on the floor exercise with a triple twist dismount, he posted his highest score of the evening, a 15.450, to move into the all-around lead.

Session one leader, Eddie Penev of Rochester, N.Y./Stanford University, finished fourth in the combined all-around standings with an 83.500 total.