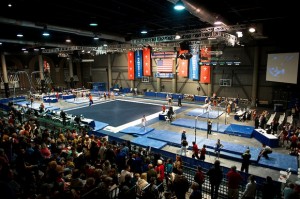 The field of approximately 96 gymnasts is divided into two preliminary sessions on Feb. 7, with the top 42 athletes based on the Men’s Program Committee-approved Points Program advancing to the finals on Feb. 9. The top three men on each event based on the preliminary session scores (both sessions are combined) also advance to the finals. The all-around and individual event champions will be determined via a combined two-day score.

The field for the Winter Cup includes current senior national team members and junior and senior qualifiers to the 2012 Visa Championships. Also invited are the top six in the all-around and the top two on each event based on the best scores from the following 2012 events: the finals at the Winter Cup Challenge; and the all-around or individual event finals at the USA Gymnastics Collegiate Championships, NCAA National Championships and the National Qualifier.

Entries are accepted from Nov. 1-30. A list of the invited athletes is available by clicking here.

Performances at the 2012 Winter Cup Challenge will help determine the 15 men who will comprise the U.S. Men’s Senior National Team through the 2013 U.S. Championships in Hartford, Conn. The five members and three alternates on the 2012 Olympic Team retain their spots on the national team.